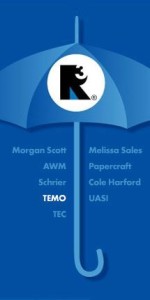 The TEMO story began in 1966 when Dave Teitler joined his father’s uniform rental business, Teitler Linen Service. Their customers included companies like ARA and the Canteen Corporation. Over the next five years Dave learned how to run a business and came to realize for him to be successful, he would have to go out on his own. It was at this time, the early 1970’s, Dave began doing business with the Paperlynen Company and Chicopee Manufacturing Company.

Dave’s linen supply customer listing began growing and included companies such as Waldbums. Satisfied with his quality of clean laundry delivered to them, Dave’s customers began adding Chicopee and Paperlynen products to their orders. With money lent him, by his father to purchase inventory, the products were delivered on Teitler Linen Service trucks. Dave, who had very little investment capital, took over a company his father had formed previously that had been named after his mother Tessie and father Morris – TEMO – and went into business for himself.

Shortly after TEMO began, the Paperlynen Company, the only manufacturer of paper headgear, saw its employees go on strike, leaving the distribution market without disposable caps. However, TEMO had plenty of these products in the stock as the vast majority of linen supply customers had been buying them on a regular basis from the company. The Paperlynen representative soon approached TEMO and proposed they sell their stock to wholesale distributors; the company readily agreed. TEMO’s inventory was sold out in a single day at a large profit.

This experience taught TEMO that servicing the distributor market was the way to go, and the focus of the company became that of redistribution. TEMO began representing such vendors as Reynolds Aluminum and Borden Chemical, among others, and the business flourished and grew. It was not long until TEMO Sales was able to stand completely on its own, and Dave left his father’s company paying back all his loans. TEMO became a major redistribution force in the northeastern United States and joined the R3 Reliable Redistribution Resource team around the turn of the 21st century.